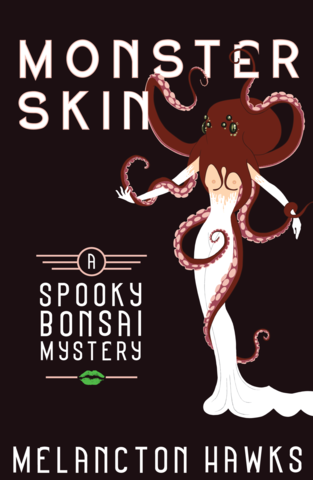 I found a mind, through a book that trapped me in it’s time slip. Monster Skin and I are like old friends. The book that never gets filed onto a dusty shelf because it needs to be seen, to be close, upon fingertips reach until something else comes close to its magick. A book that fills the pleasure void.

I’ve caressed her pages twice. I say her – and I know I am anthropomorphising – but this book is alive and a whole lotta woman! – the author, Melancton Hawks, is all man. Hawks has created a magnificent feminine force named Spooky Bonsai. She’s ‘half gefilte fish, half maki roll”, hormone ravaged, acutely aware and hell bent on revenge. For Spooky, fashion is god and couture is an expensive temple to worship at. Like any sixteen year old kleptomaniac, she is good at acquiring the latest threads to feed her faith and match her luscious green lips. This is a character that needs to keep coming back into our lives just to make sure we are getting it right.

Monster Skin is a difficult novel to categorize or well, just to explain by quick synopsis – the earth could compress a diamond faster. Big characters burst with fun and menace, descriptive phrases flow out like tied magician scarves from its throat and you are left gobsmacked at its endless silken flow. Truly surreal feels all too real, like a nature documentary – the good the bad and the ugly.

Get attuned to the ear and rhythm of the book in the first two pages and then it takes off. Extremes of fantasy, descriptions fester and sweat and you smell it all between the lines. Streams of consciousness join seamlessly and become a truly poetic story. Hawks moon is “interminable cloud stained nicotine by a million lightglobes” Skyscrapers, “fleshy towers quivering in post orgasmic droop” When I read some paragraphs I see the world on the back of elephants, on the back of a turtle. Occasionally white specks explode with words to  reflect and adore. It’s futuristic but set in the past, a sci-fi bizarro world that feels all too familiar.

It’s pace is a syncopated psychedelic word-fest. Chapters move fast, an arrhythmia of suspense. Images get trapped in your minds eye and you levitate cross legged zapped at times into alternate universes within universes and you never leave the city – such brilliant intelligent imaginings of sex, horror, love and violence.

Monster Skin for me was an elixer, a mind medicine that celebrated storytelling, philosophy and ancient specters that are so crucial to ones psyche. Like all good art, this book will evoke many different reactions. Take a look into Melancton’s head, and make your own conclusions.