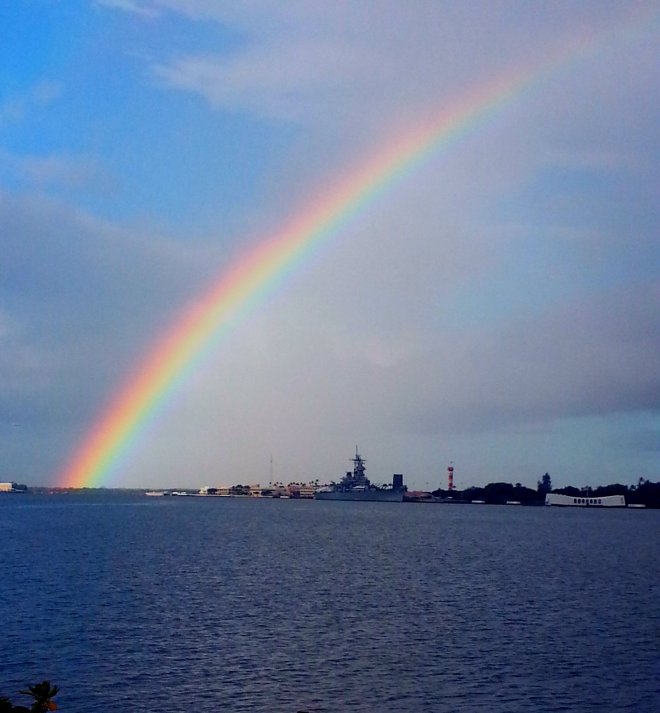 Sadako And The Thousand Paper Cranes by Eleanor Coerr

My visit to the Pearl Harbor Memorial coincided with a naturalisation ceremony on top of the de-commisioned battleship USS Missouri – its upper deck the venue where Japan formally surrendered on September 2 1945 in Tokyo Bay ending World War II. You can see photographs, original paperwork and a plaque that marks the spot – atomic muscle proving to be a persuasive solution and as we know, leaving an aftermath of death and illness when Enola Gay dropped the ‘little boy’ on Hiroshima on Aug 6 1945.

Today the ship was a buzz of proud families, clicking candid moments as one hundred new citizens originally from places like Brazil, Benin, Germany, Kuwait, Russia, South Korea, Jamaica, Switzerland made the United States of America their new homeland. I heard a woman being interviewed, ecstatic, waving her flag and bursting with emotion. She said how happy she is to belong to the country that gave her all her opportunities. She now looks forward to elections, when she always felt like an outsider because she couldn’t vote – where she was born, people died for that right.

On my visit, I was taken on a different journey of war. In the visitors centre was a display highlighting a book for International Peace Day, September 21 2013. Sadako And The Thousand Paper Cranes by Eleanor Coerr. Sadako though an original Hiroshima survivor was diagnosed with leukemia at age 12. To help gain courage, Sadako’s friend gave her a folded paper crane and reminded her of the Japanese legend – if a person is ill they will have their wish granted if they fold a 1000 paper cranes. Besides wishing for her own health, Sadako wished for world peace with every crane she folded. 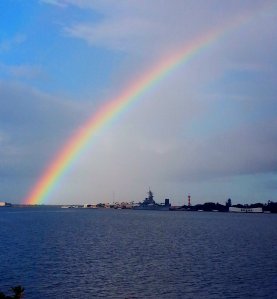 When you walk on the memorial itself, a silence takes over and you stare up at the black embossed names of those lost and interned in the ships grave. Over the edge the oil still seeps after seventy or more years, it’s old life’s blood forming an amazing colour spectrum on the surface of the water. A natural art installation which took up a chunk of my cameras memory. Looking at the rusted bones itself nature has taken over. A new beautiful reef of coral, weed and fish shimmy distracting and easing the pain and enormous weight of grief of the Dec 7 1941 attack.