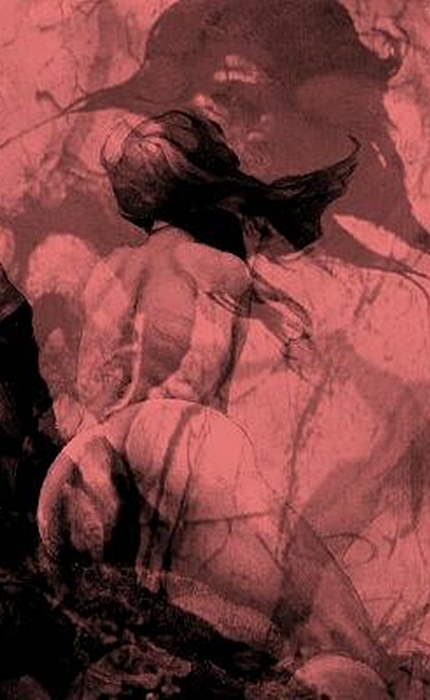 I am the overawed spectator living in endless fear of the apocalypse. My angst is a coiled freak, watching quietly from the corner. Looking out into the dark and cold I feel the Void behind me. All around, a dome of mist envelops us.
It’s true what they say. Standing still in the forest, everything else moves. I hear the wallabies frantically bounding the bush. A bowerbird tilts its head back, beak wide with blue gifts for a swooned female. Cockatoos soar high and noisily adorn the scribbly gums in a brambly ruckus. I hear the loud, lush patter of rain filling sandstone cups for all to sip. One overflows and trickles between my legs where I crouch just inside the cave.
I’m watching him. Not far off, thrashing the greasy tube of a death adder against the rocks. His black hair is shining wet and slicked all the way down his back. A few more tenderizing slaps and he tears off the serpent’s head.
I don’t even flinch. How could I, after all that’s happened?
He’d tracked us down, deep in our labyrinth of trails and trees. He’s in no hurry. He’s already won this little game and now needs merely to take his reward. Flesh to feast, to fuck, I can’t say. Either is fine.
I can’t break this almost-trance. This fascinated stare. I trust whatever it is, my blood rushing with an endorphin sedative that soothes all fear. It dulls the dark knowledge that these may be my last moments on Earth.
Magenta got away, at least. She’d run into the cold fog. He had howled then, just behind me. Then nothing but my feet smacking the mud and grunt after grunt of my breath. I was sure he’d come wailing into the cave soon enough, but no. He merely left the treeline and now toys with me.
He bites the snake and pulls it like toffee until his teeth rip through. He chews and grins and runs forward. I will my heart to beat faster, for my muscles to fill with panicked juices, but I can only fall back as he barrels into me.
He straddles me, the tail of the adder coiled loose between my breasts. He gets his fingers in the gnawed hole and strips the meat from the spine. He bites off another piece and throws the rest with a slap against the cave wall. Leaning close, he holds the meat between his teeth and grabs my face in his hand. He squeezes my mouth open and spits. He claps the other over my lips, ignoring the snot sprayed against his palm as I try to breathe and chew.
When he sees my throat ripple, swallowing, he’s quick and absolute. He tears my shirt, wrestling with my bra until it confounds him and he leaves it tangled, one cup folded over my breast and pulling the nipple. I cry out. Taking this as encouragement, he digs furrows down my belly until his fingers hook in the waistband of my khakis. I slap my own hands to his and squeeze, rubbing my thumbs over the backs to calm him. I guide him to the brass buttons and help him pluck each one loose, all the way down.
Another fierce movement, peeling them off my legs and over my muddy hiking boots. My knees come up as I plant my heels in the dirt. I put my hands on the insides of my thighs, my heart finally going, the sweat beginning to bead on my forehead.
He slaps a hand to the crotch of my panties, making me gasp. His thumb runs up the groove, somehow knowing right where to press, where to swirl in slow strokes. I run my hands up my body with a low moan and grab my bra. I shrug it overhead, leaving my arms there, limp, fingertips twitching Morse, perhaps making notes. Perhaps to relive this, if I live through this.
He pulls a few hairs closing his fist over my panties, getting a squeal, making my back arch as they’re torn loose with the yawning rip of lace and elastic. Then his head is between my thighs, his rough, fat tongue lapping me up. He snuffles, trying to burrow the tip in deeper, trying to lick me clean. Then it slithers out and I feel a finger, then two and he fucks me. A blade slicing against the roof of my pussy while his tongue slathers over my clit. His other hand slides up to my tit and clamps on, the nipple pinched flat between finger and thumb.
I convulse and my dead arms lever down to clap the back of his head. I grab his thick, knotted hair, like handfuls of rough rope and pull him closer. I come on his face and cry out in another language.
Like an ape ‘uh-uh-uh’ he scrambles over me, hair in my face, infrared eyes glowing into mine. We stare at each other within the curtain of his black, stinking hair. I run my hands up his back as the head of his cock bulges out my lips. Then he slides the whole sinister length of it into me and I drag claws slowly back down.
My calves fold under his ass and pull him in, harder and harder. His teeth find the curve of my neck and shoulder, canines popping the skin. He licks my throat and breathes on my lips. He would never know what to do with a kiss. 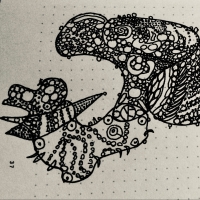