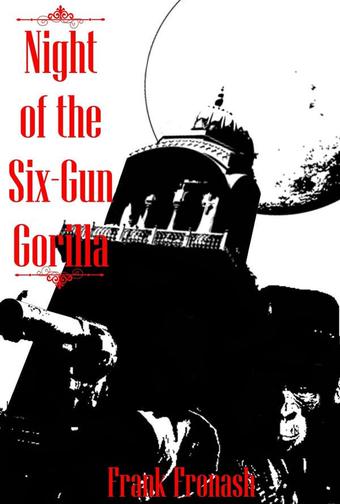 Night Of The Six Gun Gorilla

Just a short ride after his debut novel Voodoo Bosch, Weird West author Frank Fronash revisits the legend of the

The stories of the weird west are passed like folklore. They are folklore, just more recent. Night Of The Six Gun Gorilla could be just that. Well, it is exactly that. Author Frank Fronash tells a tale that might be some campfire urge of the cowboy age. As the flames dance, we are told about the gorilla that was once this, that once did that.
Readers forget, stories don’t have to confound to be interesting. Complexity is a shaded scale. While a gorilla taking his revenge might seem to demand some greater logistics, this author handles them deftly. O’Shea, (the gorilla in question) is resolved in a mere sentence in the first chapter.
From then on, the reader is left with a fast draw and a loyal heart and when your hero is a bloodthirsty nightmare like O’Shea, you don’t need anything else. There he is BOOM, spare me the bullshit.

And that’s what I love about the weird west. The good weird west. The weird west that understands its roots. No time for getting pedantic, no hair-tearing, no struggle for a hero’s soul.
O’Shea doesn’t even know if he has a soul. O’Shea doesn’t care one way or the other. He understands “The gorilla had plenty of words, little as he knew what most of them meant” Villain or hero, O’Shea doesn’t spend his every waking minute wandering around wondering. He has a job to do and is gonna get it done.
There are no deliberate pulling of heartstrings, but I felt waves of emotion as the bloody turns of phrase, turned the page. Greed & gundowns, horses & hoorahs, savagery & yes, sweetness. This book takes you to those extremes, shouting out in front for the next scene, before diving behind a rock as it plays out, bullets smacking the ground around you.

This is not my usual book, even for weird west, but it’s now a favorite. I will definitely be keeping my spurs on for riding headlong into O’Shea’s next adventure.

You can find Frank’s work here.