Lit Fiends of the World Unite

Let’s just get to the heart of this. We all scour the classics. Yes, we that get off to the beat of Kerouac, Burroughs, stories that endeared us to Bukowski and Hunter S et all. Edgy literary giants that we suckle, that shape us. Though when exploring the gritty world of ‘cosmic realism’, shouldn’t our antennae be tuning into what is happening now? The writers that are living and just breathing because we are too immersed in being entertained by the dead. Writer Joseph Ridgwell is one of the undead. He lives inside pages, lucky to be alive and well. An original. Born and bred ‘Bow-bell’, working class, self taught, perfect.

So what has endeared me to this Londoner? Apart from my own stints living and working in the UK and a diet of British television, I grew up on the edges of working class Australia.  But it’s not so much nostalgia that I’m looking for or that you will find it in his books. It’s more the sensibilities beyond the struggle. A certain freedom of expression that only true great writers have the guts to spill. Writing that you will not find in the mainstream or in regular Indie. For quite often they just take on the same market as mainstream, forgetting to take risks, keeping a stagnant lid on something that should be growing and changing the way we think about the world. Not a warm and fuzzy fantasy fix or boring bourgeois farce. I love work that makes me uncomfortable, that is challenging, courageous. I am a lover of the banned, the rebels, but not shock just for the sake of it. A story where there is no hidden agenda or contrivance. When Joseph gets on a roll that’s all it is. It is natural, it is life. He says fuck it, the shields are down and it is one of the best characteristics a writer, a great storyteller can have. That gift of turning one’s imagination into something that feels completely real.

I’ve caught Ridgwell in the throws of release. His latest collection of short stories is almost dry. That’s real ink folks. Take a quick moment to delve into a lost art where one can be absorbed in a page instead of immersed in electronic aspic. How it is produced is only an aside. It’s what’s inside that counts hey? That helps a lot, but I also have a paper fetish and Bottle Of Smoke Press

have gone apeshit-ballastic-beautiful on this one. Especially with the collaborative ‘deluxe edition’ which packs Ridgwell Stories perfectly with six deep and edgy woodcuts from writer and artist Jose Arroyo. Ridgwell and Arroyo share similar spirits, collaborating on this project from different continents. When you stare at Arroyos images, truth reveals words without characters. “did I just see that?” eye rubbing etches that are absolutely brilliant. But if the 2 tons is a little out of your range (though entirely worth it) you can get your hands on signed hardcovers or straight out paperbacks. But, remember kids, short press runs. So like me, get in early with pre-orders here.

Shyly I approached Mr Ridgwell for how would a International Cult Figure, like himself find the time to chat. Well in fact I scored an exclusive. Got a little taster of what’s to come. I had read enough from guest spots in Lit Zines like PUSH, Paper & Ink  & Hand Job to know that I needed more. Also, catching plenty of buzz and work via more of his posse of exclusive underground publishers like leamingtonbooks, who have his ‘road novel to end all road novels’ Burrito Deluxe ready to munch. 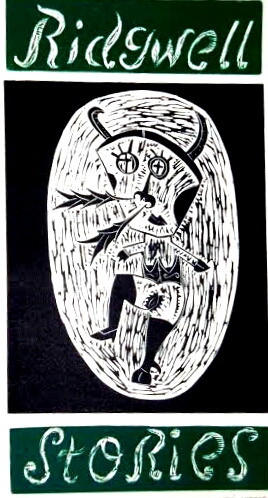 So I delve even more and next thing I know, four samples from Ridgwell himself are slammed into my inbox. Twisted, no holds barred adventures that would make Le Pétomane blush. Asking the question “how can you write about life if you haven’t lived” Simple and true enough, though Ridgwell likes to take things a little further. What I got to taste were psyche slayers. Very real dark fixes filled with primal fears, fast paced scenarios, and plenty of good ole bollocks. One thing is for certain. When you read a Ridgwell story, it will twist your melon, and that is a pleasure we don’t get enough of. You can discover more about Joseph Ridgwell here. You can check out more of Arroyas work via twitter.