The lone glove on the ground is universally bonding. Who does it belong to? Why is it there? Where is the other?  Questions fuel a writer’s inventiveness. The glove on this cover is by no way a writing prompt, for me it simply represents the imagination, the beautiful, the dark, the unknown, the funny, the angry, life affirming stories that are inside us all … and possibly the creature who hides beneath the grate scratching in my underground carpark because he lost his other glove! Who really knows, it’s just a guess.

This zine is new on the scene, but the mastermind behind Glove is not. I’ve been inadvertently following editor Ian Cusacks‘ work for years via the Great British zine train that I seem to have an eternal ticket on. Hand Job, Paper & Ink and the now defunct PUSH and their branch lines have been hurtling my mind to great publishers like Tangerine Press, Burning House Press, East London Press, Murder Slim Press, Pig Ear Press , Blackheath Books and short fiction magazines like Open Pen . These all include the standout writers from the zines that I cherish. My writing connections already satisfyingly endless. Glove had its first issue launched at the beginning of the year. This birds latest carry round tome for those 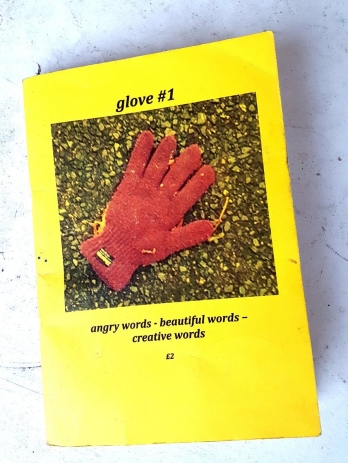 moments when all things electric fail me. Moments when ones mind needs sustenance away from the permeating light of devices. I knew this issue would be filled with high calibre word blasts from the names on the contributors page.

We start with Michael Keenaghans Thief Taker. Michael delves into the personal side of cop and ‘chavenist bastard’ Jack, as he copes and battles the juggling of business and pleasure. Michael’s storytelling is laced with grit and heart, personal crimes weave in and out of the turmoil of being on the job 24/7, a kick it in the guts beginning. In this issue, Cusack’s goal it seems, is to fit this fat with as many authors as possible. After this story, it becomes devour time. Stock Car Racers by Gwil James Thomas takes us to a place of early memory, as “the weekend warrior” finds time to escape and find their bliss. We start to understand the myriad number of ways we entertain ourselves, our reward for time spent away from our true loves and our true selves. Gwil’s poetry collection Gwil Vs Machine has many more perfect moments and recommend you get a copy in the second print run of it via Paper & Ink Zine.

Terence Corless is a constant of the zine lit fiend circuit and rightly so. This, a taste from his upcoming novel Quarter Life. Some of the characters that Terence pulls out are right scrotes. Seems Terence has had loads of experience cause the characters and circumstances he pulls the reader into feel very real with that numb, no consequence terror of friends we have left behind. Don’t know much about Governor Scott Walker or Wisconsin politics for that matter, but author John Grochalski surely gives me plenty to ponder with his dedicated poem america the beautiful (or) moloch for too early in the morning. Such beautiful, maniacal venting has me pounding my desk with yes! The defeat in his second piece widening gyre, is heartbreaking, there is a surrender in the words, sharing the frustration inside the pus of politics.

Independence Day Party by Christopher Iacono at first feels no way celebratory. A letter is cleverly dissected by prose that reveals and twists over the lives of Joanie and Richard. Tragic and bizarrely joyous, Christopher Iacono has more work to read via cuckoobirds.org . Josephine Allen’s The Life and 21st Century Nudes smack right into me. Her truth and empathy stings, “my sexuality isn’t just seen, it’s smelt and touched and heard in the tiny moments in between” Whooshka! I am becoming a huge fan of her writing. Joe, Me and The Theory is Jason Jackson’s piece. I know Jason shares my obsession with heading out with new ways of seeing via his photography. In this piece he has me pondering the Fibonacci sequence as he asks what makes a great photograph. Interspersing his love for music, and heroes on the wall “It’s hard to tell whether he’s about to ask if you want a drink or a smack in the face” when you are talking to Strummer it would surely be even bets. These experiences shape our path, the questions only he can answer.

When I see other zine editors in other zines I get such a buzz. You feel their feet on the table, that relaxed – ‘this is for someone elses gathering kinda vibe’ instead of that awkward –  ‘It’s my party and I’ll write if I want to’ feel. I’ve spied a few through these pages so far. Hi-Vis Publisher Jim Gibson shares a candid moment from his youth or that of fictional acquaintance Greg, in Greg 4 Kelly. Small town first love memories, simple, its melancholy brushes light – not quite “She walks in beauty, like the night” …thanks LB – more a solid ownership of regrets and decisions amore in a small feral town. Joe England, he of PUSH, 5 Managers and his new word venture C.O.N thrilled me with a brilliant piece on snogs and office gossip. His writing in The Letter is as tender as it is hard core, Joe can obviously do more than gather the greats onto pages. Paper & Ink Zine editor Martin Appleby lets his beard down with a couple of treasures that may or may not come from his poetry release Worse Things Happen At Sea. Dreams and In The End We All Become Our Parents Whether We Like It Or Not both lament decisions, changes in our priorties, but only one mentions a heavily tattooed dwarf. Glove editor Ian Cusack of course deserves to put on his writing jacket and give us two belters Ballybofey which is an out of time mind stomper that has me thinking Ian has been smoking his belly button fluff while Shopping is a lump of text that forms a photograph of suburban surreality, unlimited in its chilling or mundane ending, you choose. Delighted to find more ways on how to find his work.

The contributors continue. Mark Beechill is beautiful gloom and reflection with Ghosts and Pebbles. It has more of a micro fiction feel hiding inside a poetic coat. I will definitely seek some more of his poetry that he has released from his den of obscurity. Pretty sure I’ve read Ian Parris before, can’t put my finger on where but know I dig his style of story. A Tripadvisor nightmare, boys on the prowl and very much out of their comfort zone. Parris has a great honest flow in his story Holidays In The Sun. The reader becomes trapped inside the cogs and thoughts of four lads with two things on their mind, booze and broads abroad. What goes on inside these heads is fast paced smarts that tickles as much as they repel. Ford Dagenham posts a poem or pic a day on his blog Hatchbacks On Fire. I have said before it is an essential fix of mine to read everyday. The two selections here are not from his brilliant poetry release A Canvey Island Of The Mind so I feel another book may be forming if this is the magic that Ford is exposing here. “I was on a wild ragged drunk. I was in a teflon bubble” boils Fuckup POV In Hiatus. Barking In The Streets reminds me why his imagery and thought processes become addictive.

Anna Wall I read with fresh eyes and excitement as my skin goosed by so much beauty. Adultery and The Bricks That Built The Kiln, two different relationships, lust perils, the understanding of mistakes and the chemistry of comfort. A regular at Nottingham’s Speech Therapy, if I ever was in town I’d be there in a blink. Keep Calm And Carry On by Emily Richards recites the loner armed with a beautiful optimism. Her breath of humour ignites as she tries to impart her good heart on Patrick the homeless fella round the corner. This is a delight. Diving into her blog Poetry In Pink with my next cuppa.

The truth emitted from Rob Plath‘s single entry And Nothing Else Fills reveals often all is not what it seems. With many releases revealed via his website, they will surely be on my reading radar. It is quite challenging at times scanning through such a variety of styles and emotional states in one sitting, sometimes you have to stop still after one short story or one single poem. At the Border Crossing Between Hello And Goodbye by Ron Gibson Jr had this effect. Too much to process to just pass over to the next. Fortunately I have read Jared A Carnie’s work before, his taster here Geography dwells on the traumas that our land amasses. His novel Waves is one I hope to get to read one day. Love a good spy story and this short, Wolf Orff’s The Reckoning (For Elif Bateman), seems like a snippet from a larger saga and sets a great premise complete with hand knitted bog roll covers. Also check out Wolf’s amazing collection of discarded and abandoned bits and bobs via his blog just a treat.

These glimpses of the great under heard via Urban F is an easy way to record writers I should never forget. Topped and tailed with these outbursts of feelings reminds me of their style kinda like Guy Pearce in Memento using photographs to remember, I use reviews to recall my life of reading. Writer Chris Milam though will need to be ‘post-it’ noted on my computer. His story Garbage Man is so intriguing. I had heard about archeologists knowing how rich a family was by the size of the stem removed from an asparagus stalk. But the effort of discovering more, via this ‘trash voyeur’ is an amazing uncovering. He knows everything about the lives he rips into. Holy hurricane indeed, I want more stories by this guy.

Unfortunately, as with all great small print runs, Issue One has sold out *pass the tissues* which also means everyone better get in quick once issue Two is announced. Submissions for Issue 2 are coming to a close but more contributions are always welcome via iancusack@blueyonder.co.uk