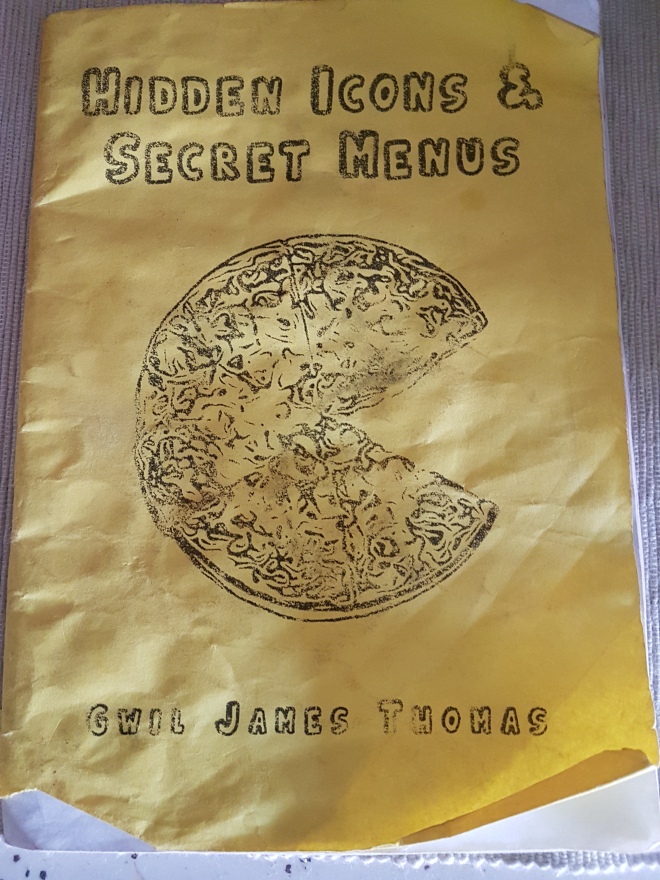 Gwil James Thomas has appeared in many excellent high quality Zines from the UK over the years. His Gwil V’s Machine released through Paper & Ink was a brilliant debut so I’ve been looking forward to his second course, Hidden Icons & Secret Menus. It’s been ready to consume for a while now and has been on hand as I eat my way through New Mexico. Its cover, which I have included above is my personal copy, though it is less than glamorous now from dripping tamales and margharita rings, it did more than act as a portable place mat.

I knew that Gwil’s words would connect with me on a gastronomical level, as chef’s present and past, we have this in common. There is a fire in his belly and the first words fly out fierce. A quick duck and deflect, similar to moves one learns in kitchens under the command of an insane head chef which, I might add, there are many. This clearing of lungs is cleansing. A fresh passage for what’s been brewing in his mind. From Smiley Potato Faces to four encounters with John Malkovich, this collection keeps the reader’s spirit bright even though many of the scenarios in his poetry may have been less so for him.

Interspersed with love laments at solitary tables, Gwil uses food to link his emotional state. We often remember experience by what we ate, where we ate it and of course who with. We also know how hard it is to swallow tears and linguine at the same time. Which brings me to A Grown Man Talking About Food Like It’s Pornography/Pink & Juicy, one of my favourites with its passionate play of mutual blood lust, also This Failed Utopia “We could pull out our teeth, shed our skin, end it all now if only we knew where to begin” The poetic courses continue with dumplings, gyros, pizzas, tortillas, love and friendships, lost and found. This is a strong collection of vignettes, a personal, honest and heartfelt menu of sweet reminiscence. Hand pressed and numbered with a limited run of 25, get yours if you can through Analog Submission Press.

While you are there, check out another release which is on my radar. Gwil James Thomas joins forces with John D Robinson, a poet who takes daily accounts drained of their beauty and turns them into something extraordinary. Romance, Renegades & Riots should be an exciting collaboration and is also available from the excellent Analog Submission Press.